menakan
Watch the romantic movie Manasu Starring Oviya Shakti in lead roles along with Senthil, Kovai Sarala and many others only on Rajshri Tamil

Synopsis
Sanjeev (Sakthi) is a studious college student while the carefree Vicky (Sanjeev Kumar) spends his time causing trouble in college. During the college exhibition, Sanjeev accidentally hurts Nandhini (Oviya) on her hand and he immediately apologizes for his mistake. An angry Vicky then gets into a fight with Sanjeev but Sanjeev beats him and his friends up. Nandhini's mother Pankajam (Jayachitra) becomes overprotective and she suspects her daughter of being in love with their neighbour Sanjeev. Being sick of this situation, one day, an impulsive Nandhini kisses Sanjeev in front of her mother Pankajam. The two eventually fall in love with each other. When her father (Vijayakumar), an ambassador, returns home from abroad, he tries to convince Nandhini to forget her lover but Nandhini wants to marry Sanjeev at all means. Nandhini's father then comes to know that Sanjeev killed his mother in the past and tells it to his daughter. Meanwhile, at a college excursion, Vicky and his friends try to rape their collegemate Juli (Jeeva) but Sanjeev comes to her rescue and Nandhini spits on Vicky's face. Vicky and his friends are consequently expelled from college, and Vicky swears to take revenge on the lovers.

Thereafter, Nandhini compels Sanjeev to reveal the reason for killing his mother. Many years ago, Sanjeev lived with his parents who were poor labourers. After the death of his father, Lakshmi (Mounika) became vulnerable and her boss tried to woo her and one night, he entered her house and tried to rape. The young Sanjeev had no other choice than to kill his mother to save her dignity and he was sent to jail for his crime. He was then adopted by a wealthy foreigner who gave him everything except affection. Sanjeev tells Nandhini that she is the first person who showed him affection and Nandhini in tears responds that he did the right thing. Nandhini's parents decided to take their daughter with them to go abroad but they change their mind when they read her private diary and they want her to be happy. In the meantime, Nandhini meets Sanjeev at the beach to talk about it and vengeful Vicky comes to the place with his friends. During the fight, Sanjeev manages to beat them up and the couple tries to run away. Vicky then shoots Sanjeev in the legs and he tries to rape Nandhini in front of Sanjeev but Vicky leaves the gun behind him. Nandhini escapes from them and hugs a wounded Sanjeev. When Sanjeev aims the gun at them, they laugh because the gun had only one bullet left. To save his lover's virginity, Sakthi pressed Nandhini tightly in his arms and shoots in her back thus the lovers died.
Subscribe now for more updates: http://bit.ly/Subscribe-ToRajshriTamil

Join us on Google+
https://plus.google.com/+rajshritamil 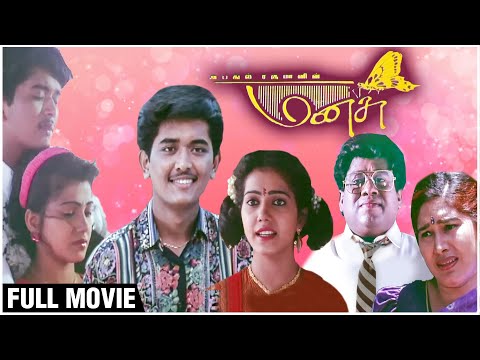 Watch the romantic movie Manasu Starring Oviya Shakti in lead roles along with Senthil, Kovai Sarala and many others only on Rajshri Tamil Synopsis Sa...